I’ve always been a geek. Growing up I was a complete book worm, an avid action, fantasy, and science fiction fan, and I was drawn to all things science—and today, none of that has changed.

As a teenager I dreamed of becoming an astronomer, a botanist, a biochemist—of making some sort of mark in the field of science. And my dream came true, after eight long years at university I gained my doctorate in biochemistry. I worked for a number of years in research institutes, a university, and in the private sector. But that came to a halt after an accident left me recovering from knee surgery, with nothing to do but stare up at the ceiling while I recovered, wondering what to do next.

My defining moment as a reader also came during my teenage years—when my Aunt gave me a big box of romance novels to read. I fell in love with the romantic suspense genre featuring men and women battling against an enemy, and fighting for a happily ever after, all with the odds stacked against them. I was obsessed (and am still obsessed) with blockbuster movies like Star Trek, Star Wars, Top Gun, and Navy SEALs—and TV shows like Star Trek, Charmed, Battlestar Galactica, and Stargate SG1. I was fascinated with the men and women trying to save the world (or the universe), all while falling head over heels in love with their equally strong and smart other half.

So with this all in the back of my mind, a spark of an idea formed while I recovered from surgery. I would write a book, a romantic suspense novel with action, drama, and a big dash of romance—featuring true to life characters I could admire, and a romance between them that would endure. And write the book, I did. And then I wanted to write another…

And that leads me to today. I write romantic suspense novels with the help of my mad geeky and science skills.

I live in the deep south of New Zealand with my handsome, equally-geeky husband, a little black cat called Missy, and an alarmingly growing collection of Funko Pop! Vinyl collectables. 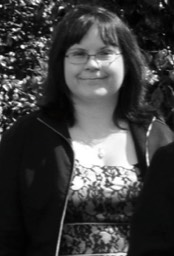